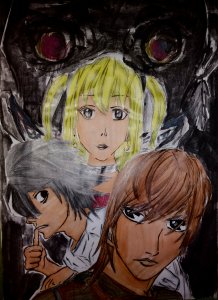 (Made this shitty drawing when I was 13)

I wasn’t really into Anime but the one that I watched, well, I fell in love with the concept! Death Note was the most thought-provoking series I’ve watched. I loved every bit of drama, suspense, thrill & horror in it.

I can’t help but wonder what would happen if such a thing as death note really existed. It would definitely take a toll on our morals. Everything would fall out of balance. The Godly powers that it bestows upon one can really destroy a human being, like it did to Light Yagami.

It could prove to be a help in getting rid of corrupt politicians & others but then again doesn’t killing them make us corrupt too?

It raised many mindful questions that haunted me for quite some time.

If we look at it metaphorically, Light & L could be seen as two sides of the same coin; two types of personalities we all possess. Let’s also not forget our demons or Shinigami. Sometimes, when we let the dark side get the better of us, it can prove to be detrimental making it impossible to get a hold of ourselves.